The most expected event of the Bolyai Day is the distribution of the Bolyai János Research Scholarships launched in 1996. These scholarships are awarded for one, two or (most typically) three years for the implementation of a given research project. In 2019, 151 young researchers got awarded for their applications and took part at the solemn festivity in the Banquet Hall of the Hungarian Academy of Sciences on 26 June.

The scholarship, which means a monthly HUF 124,500 net income to those awarded represents not only some financial appreciation, but also an outstanding acknowledgement and opportunity for the career of the young generation of researchers. The invitation for applications had the declared intention of helping the winners achieve serious results during the support period and fulfil this way the requirements needed for obtaining the title of „Doctor of the Hungarian Academy of Sciences”.

(This aim is also promoted by another scholarship within the framework of the NKFIH New National Excellence Program called Bolyai+ [Bolyai Plus], which allocates a monthly scholarship of HUF 200.000 for 5 or 10 months. Since 2018, Bolyai+ can be awarded to those who are already winners of the Bolyai Scholarship, work as teachers/professors at some institution of higher education and undertake not only the implementation of their research project but also very serious teaching activities to train the future researchers.) 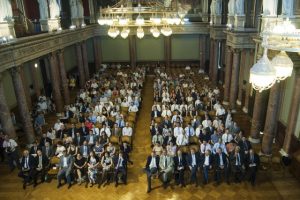 From among the members of the Hungarian Society for Microscopy, Csaba Cserép (Institute of Experimental Medicine of the HAS) was among the awardees in 2019. Former scholarship winner Andrea Lőrincz (from the same Institute), whose final research report was highly appreciated was awarded with a Bolyai Plaque Award.

Methods using microscopy constitute an integral part of the work of both young researchers. Independently from one another, they both have already been awarded with the Prize of the Foundation of Electron Microscopy.

We congratulate our young colleagues and wish them continued success in their future work.

Text: Dr. Katalin Solymosi
Photo: Tamás Szigeti /mta.hu/
You can read the article published on the home page of the HAS here