For the last two years,  most of our colleagues have seen each other only on  TV screens, if they did not work in the same workplace. Just as almost everbody, HSM members also missed meeting in person, although our one-day Zoom-broadcast conference programme in May even included a virtual wine tasting, and with wine sent in advance, the organisers ensured that no one had to listen to the presentations with a dry throat.

Nevertheless, an initiative was launched, thanks mainly to Miklós Soós (Auroscience), to have a one-day conference in the autumn, or rather a one-night conference in the hotel because many of us have to travel several hours to reach Siófok. Of course, the wine tasting programme could not be missed, and the payment of its cost was offered by Miklós.
In the autumn, because other people had also planned programmes, instead of a sunny October, we only got a date for the foggy November 11-12, but we were lucky, although Thursday was not so sunny by noon either but on Friday everyone could start home in bright sunshine.

Zoltán Kristóf and Béla Pécz organised the programme, László Barna provided a great help with his valuable knowledge of where there are labs excellence in microscopy and where we can find techniques and methods worth learning in Hungary, and Kati Balázsi worked tirelessly to collect the registrations, writing and many times cancelling the invoices when she got wrong addresses, and negotiated with MMT sponsors. The hotel also pitched in a bit, reducing the 100% penalty for its long-time guest for late cancellations due to illness and other reasons. So, all in all, thanks to the support we received for our conferences this year from Auroscience, Femtonics, Image-Science, Jeol, SPI and Zeiss, our small society was not only able to provide the financial support for 14 invited speakers, but its financial situation did not get worse. Thanks to our sponsors again!

How was the conference itself? Very good atmosphere, relaxed but not disjointed. 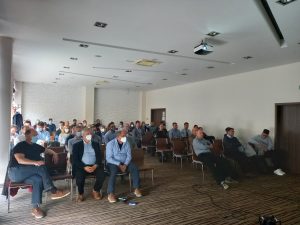 True, we could follow the talks and lab demonstartions of Péter Horváth (SZBK), Csaba Cserháti (DE) and Ayaydin Ferhan (SZBK, SZE) via the internet, but it worked and we could also ask questions, even, at Péter’s request, we could show him how many people listened to his interesting and valuable lecture, with or without masks.
Those with vaccination certificates and negative Covid tests that day,  feeling protected compared to the current conditions, listened to the microscopists from all over the country, from Miskolc to Pécs, from Szeged to Veszprém, telling us what they do and why they do it. It seems that even a new collaboration has started. . .
T 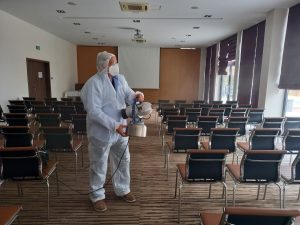 alking of testing! The fact that everyone can only occupy rooms after a fresh negative test was a very useful idea of Zoli Kristóf and Miklós Soós, but Miklós Soós even did more than just carrying tests and hand sanitizers. (Sanitizers were at hands in several places in the hotel and the auditorium was ventilated through large doors opening to the outside.) He even brought a professional device to sanitize the room with H2O2 steam before the first lecture and during the break between the 2 hour lecture blocks!

The wine tasting was also well attended, except that our regular protagonist Béla Pécz could not be with us, although fortunately he is not ill. 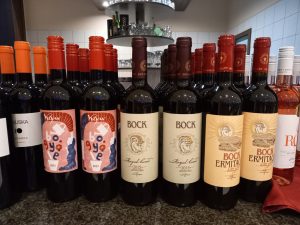 Everyone who was there was obviously happy to be there, and we hope to see him again next spring without so many rules and preparations. 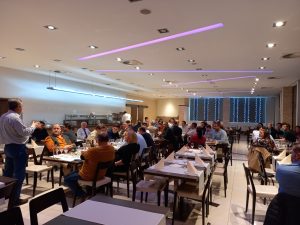 The next MMT conference will take place 5-7 May 2022 in Siófok, at the Panorama Hotel.