Those who have only known about Academia Europae as an organization where the membership is an honor and one can be nominated irrespectively of the area of research, now have the opportunity to be familiar with the Young Academy of Europe, which was founded in 2012. Among the prerequisites of its membership are the professional excellence and active and effective… Teljes cikk » 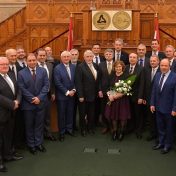